Are you dreading making the transition out of a swaddle? This is one of the more difficult transitions for moms and babies. Just when your newborn has gotten the hang of sleeping for a few hours at a time, and you’re finally feeling semi-rested (maybe), it’s time to stop swaddling baby and make a change that could ruin the precious sleep you’re actually getting! Read on to learn when and how to transition out of the swaddle and not lose (too much) sleep! 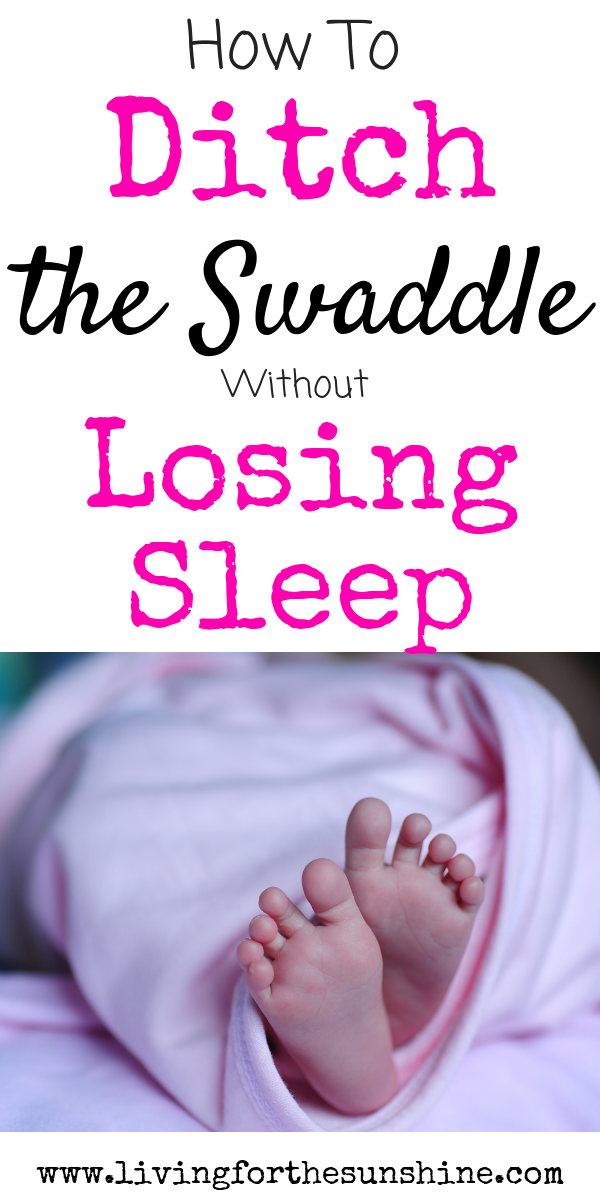 Swaddles are a wonderful way to help newborn babies sleep for longer periods of time. Newborns are born with a startle reflex, which can wake them from their sleep prematurely. The swaddle prevent that from happening by restricting their movement.

Plus, swaddles keep baby feeling warm and snug, similar to how they felt in utero (not much space in there by the end of pregnancy!).

Swaddles have been a lifesaver for many a new mom. They are one of my top tips for helping your newborn sleep for longer stretches.

How to Stop Swaddling

Like almost anything with babies, just as you settle into a routine, everything changes. It seems like you are just getting into a groove and before you know it, the swaddling must stop (more on when and why later on).

If you are like me, you are TERRIFIED to stop swaddling baby. After a few months with a newborn, sleep is already so precious, you want to avoid losing anymore sleep than you absolutely have to.

With my first daughter, I prolonged transitioning out of the swaddle for as long as possible. It turned into an absolute disaster and we ended up having to transition from the swaddle in the middle of the four month sleep regression (more on this later). It was a NIGHTMARE. I learned a lot from this experience (although I was a walking zombie at the time).

With my second baby, I learned my lesson and our transition out of the swaddle is going MUCH more smoothly.

When to Stop Swaddling Baby

Different sources give different times stop swaddling baby. Depending on who you ask, anytime from one to five months is recommended. Most sources do state that babies who can roll should not sleep in a swaddle.

I would strongly recommend transitioning out of the swaddle before or around 3 months.

If you are a first time mom, you may not be aware of this fresh layer of hell.

Basically, at or around four months, baby’s sleep switches from deep and heavy newborn sleep to more adult-like sleep rhythms with cycles of deep and light sleep.

This means baby is much more likely to wake up between sleep cycles and needs to learn to soothe themselves back to sleep.

In other words, you will not be getting ANY sleep, at least for a few weeks, until baby has figured this out.

Babies also learn to roll over at this time and should stop being swaddled. So on top of transitioning to adult sleep, baby has to transition out of the swaddle. This can be a recipe for disaster!

My solution? Start transitioning out of the swaddle a little earlier, and get baby used to sleeping without the swaddle BEFORE the sleep regression occurs.

The perfect time to stop swaddling, in my opinion, is at or around three months, so you can get past the transition out of a swaddle before the regression starts.

How to Transition Out of the Swaddle

This post contains affiliate links. I may receive a small commission at no cost to you if you make a purchase on a link from this page.

What to Use Instead of a Swaddle

OK, you know you need to stop swaddling baby, but what are you going to use to keep them warm at night? It is a big no-no to cover baby with blankets. In fact, baby should be sleeping with absolutely nothing in the crib for the first year.

So how do you keep baby warm at night? The solution is simple. Use a sleep sack! Sleep sacks are wearable sleeping bags for babies. Not only are they safe for babies to sleep in, but you never have to worry about blankets being kicked off in the middle of the night.

Here are a few of my favorite sleep sacks:

Don’t Stop Swaddling Baby Until  They’re In the Crib

I would advise you to make the transition from the bassinet to the crib before you transition out of the swaddle. That way, baby can still feel warm and snug while in a much bigger sleeping area.

If you can make the transition to crib first, you’ll have an easier time than if you stop swaddling baby while switching sleeping areas as well.

Baby Steps When Transitioning Out of a Swaddle

You do not have to make a sudden transition out of the swaddle and into the sleep sack all at once.

Instead, the transition can be as gradual as you would like. You can even buy sleep sacks with velcro swaddle arms to help with the transition.

First, swaddle baby with one arm out of the swaddle and the other tucked inside. Try this for a night, or a few nights until baby is used to it.

Next, take the other arm out, but keep the swaddle wrapped around the chest to keep that snug sensation. Again, give the baby a few nights to get used this feeling before removing the swaddle all together.

Once baby is out of the swaddle and you’re still worried, you can safety pin the arms  of the sleep sack closed so baby’s movement is still a little restricted.

If you’re REALLY worried about this transition, you could always combine the swaddle and sleep sack (just make sure baby doesn’t get overheated).

Put baby in the swaddle with an arm out and then put the sleep sack on with arm hole safety pinned closed. That way, even the free arm is still restricted from too much movement because it’s enclosed in the sleep sack. 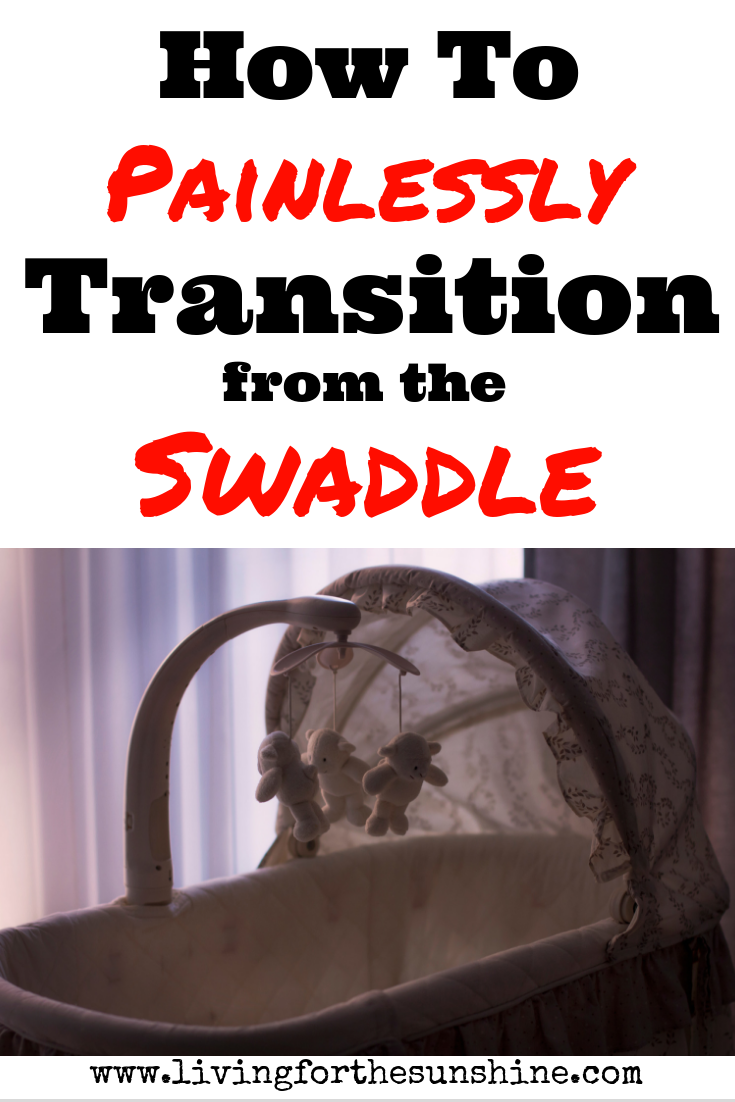 Transitioning out the Swaddle One Nap at a Time

Remember this transition can be as brief or as drawn out as you want. You might try the sleep sack during one nap per day so baby can start getting used to it before you start it at nighttime. That way, if the nap doesn’t go so well, at least the baby won’t be waking you up at night!

You can also start the night off in the sleep sack, but switch halfway through the night. If baby’s sleep is really terrible, you can re-swaddle in the middle of the night.

For example, last week we started this transition with one arm out of the swaddle. My daughter had a hard time going to sleep and was up at 9 pm and 12 am. At midnight, I put her arm back in the swaddle so she (and I) could get some much needed sleep. Then she was able to sleep until 5 am.

The next night we tried going down with one are out again, This time she slept until 3 am before I reswaddled her.

The third night she slept until 4:30, which is when she normally wakes up for a feed. After the third night, I felt ready to make the switch to both arms out.

Sample Schedules of When and How to Stop Swaddling

Night 1-3: Swaddle baby with one are out

Night 10: Baby sleeps in sleep sack with no alterations.

Baby is three and a half months old

Night 1-2: Swaddle baby with one arm out. Sleep sack is worn over the swaddle with armholes pinned shut.

Night 4-5: Swaddle baby with both arms out, sleep sack worn over the swaddle with arms in the sack, but no safety pins.

Night 6-7: Swaddle baby with both arms out. Sleep sack is worn over the swaddle with one arm through the sleep sack arm hole and one arm inside the slep sack.

Night 8-9: Swaddle baby with both arms out. Sleep sack is worn over the swaddle and both arms are through the sleep sack armholes.

The important thing to remember is that you can make this transition as slow or as fast as you and your baby need.

If you feel you need an entire month to transition, do it.

If you’ve had no sleep for a week, whether it’s because baby is not adjusting well or because they’re sick, teething, etc. etc., go back to what was working for a night or two and then keep taking baby steps again once things go back to normal.

By starting this transition at three months, you have a whole month to make the transition. That is plenty of time to deal with any bumps along the way.

Most of all, no matterhow anxious you are about this transition, remember, no baby is going to grow up and go to university still needing a swaddle. They (and you) will get through this transition just fine. 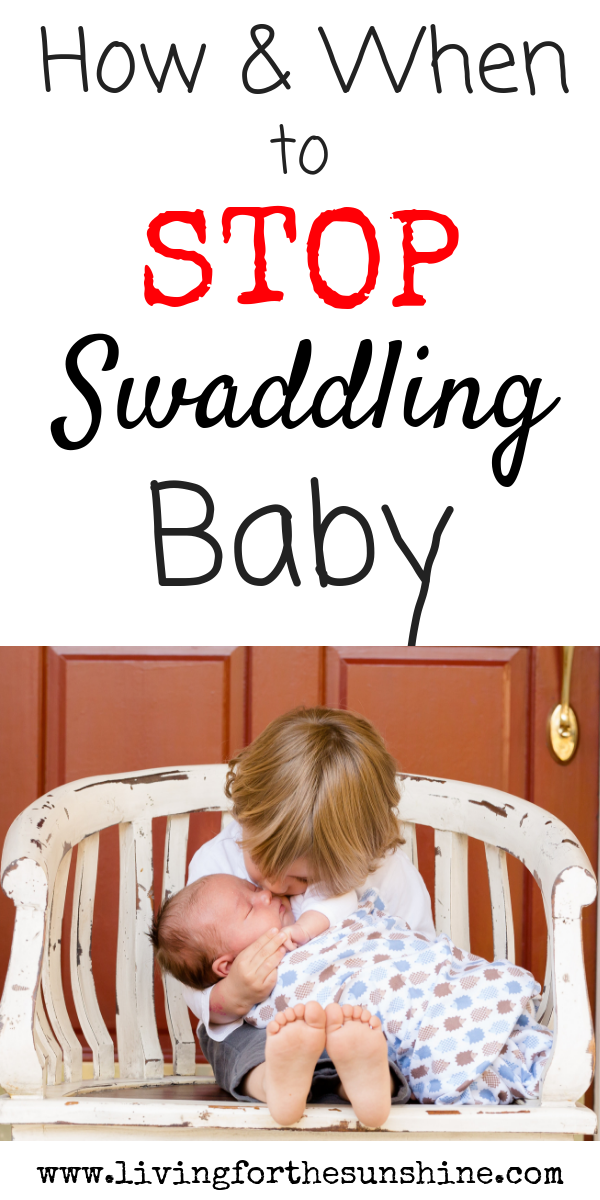 What is your biggest concern about how to stop swaddling baby? Do you have any tips for other moms? Share below!

This website uses cookies to improve your experience while you navigate through the website. Out of these, the cookies that are categorized as necessary are stored on your browser as they are essential for the working of basic functionalities of the website. We also use third-party cookies that help us analyze and understand how you use this website. These cookies will be stored in your browser only with your consent. You also have the option to opt-out of these cookies. But opting out of some of these cookies may affect your browsing experience.
Necessary Always Enabled
Necessary cookies are absolutely essential for the website to function properly. This category only includes cookies that ensures basic functionalities and security features of the website. These cookies do not store any personal information.
Non-necessary
Any cookies that may not be particularly necessary for the website to function and is used specifically to collect user personal data via analytics, ads, other embedded contents are termed as non-necessary cookies. It is mandatory to procure user consent prior to running these cookies on your website.
SAVE & ACCEPT
1904 shares