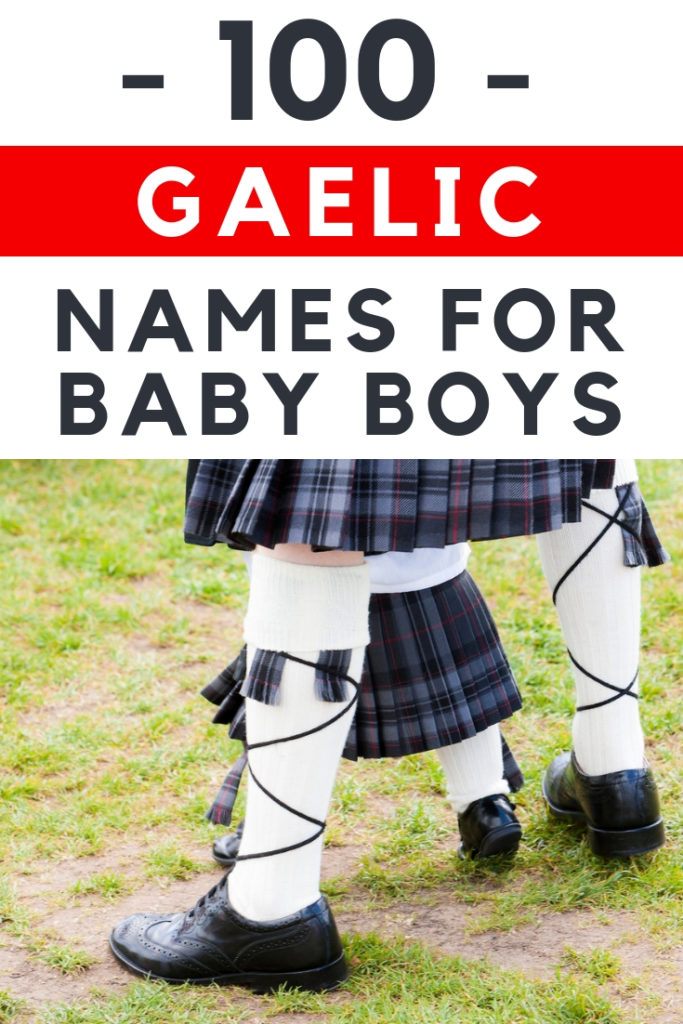 Gaelic names are extremely popular right now. They have a rugged feel without being cheesy.

You may want to choose a Gaelic name to honour your Scottish or Irish history. Or you may admire the culture and pay homage to it by choosing a Gaelic name. Or maybe you just like the sound of Scottish names, which are undeniably cool.

Many moms enjoy the Netflix show, Outlander, or the amazing series of books the show is based on. If you love Outlander, a Scottish name could be perfect for your baby boy.

We’ve compiled a list of over 100 Scottish Gaelic boys names to help you in your quest for the perfect baby name. Many of these names are also used in Ireland, but we focused specifically on Scottish names for this post.

Take a look below and maybe you’ll find the perfect Scottish Gaelic name for your baby boy!

Meaning ‘solitary woodland clearing’, this name was originally a surname.

Scottish form of Alexander, which is from the Greek for ‘defending men’.

Meaning ‘genuine’ and ‘bold’. This name was a Norman name, being influenced by Germanic and Greek elements. It was popular in Scotland in the Middle Ages.

After an island off the coast of Scotland in the Firth of Clyde.

Meaning ‘birch wood’, this was originally a place name.

Name derived from the Gaelic word for life, ‘beatha’.

Originally a Scottish surname, from the Gaelic for ‘plain’ or ‘field’.

Originally a Scottish surname coming from the island of Bute.

In Gaelic this name means ‘young whelp’ or is used as the Scottish form of Columba, which is Latin for ‘dove’.

In Gaelic this name means ‘born of fire’ and is anglicized as Kenneth.

Anglicized version of Coilean or Cailean.

Scottish version of Cormac, which in Irish Gaelic means ‘raven’ and ‘son’.

Scottish nickname for Andrew, which means ‘masculine’ in Greek.

From the Gaelic name, Domhnall, meaing ‘ruler of the world.

From the Scottish surname, Dubhglas, which means ‘dark river’. It was originally a place name and became a name of one of the Scottish clans.

A variant of the name Dougal.

English spelling of the Gaelic name, Donnchadh, the meaning of which coming from the Gaelic words for ‘brown’ and ‘battle’.

The Gaelic spelling of Henry, which means ‘home ruler’.

Originally a surname, referring to a Scottish town. It Gaelic it means ‘projecting height’.

Anglicized spelling of Eoghan, meaning ‘born from a yew tree’.

Anglicized spelling of the Gaelic name, Fearghas, which  means ‘man of vigour’.

A place name in Scotland that was originally one of the kingdoms of Scotland.

Scottish spelling of Philip, which means ‘friend of horses’.

Originally a surname. The surname of the main character, Jamie in the popular book and television series, Outlander.

Popular Scottish form of Gawain. Gawain was a popular medieval name, and the nephew of King Arthur in legend.

Name derived from a Gaelic phrase meaning ‘servant of Christ’.

Meaning ‘servant of the bishop,’ this is the Anglicized spelling of the Gaelic, Gille Easbaig.

Meaning ‘valley,’ this was originally a Scottish surname.

A variation of the surname, Graham.

Originally from the surname, Grantham, an old English word meaning ‘gravelly homestead’, brought to Scotland in the 12th century.

A Scottish surname, originally from the French ‘grand’.

A surname which originated from Gregor.

Anglicized form of ‘a Sheumais’, which is a form of James, which comes from the Hebrew name, Jacob.

Meaning ‘green water’, this was originally a surname.

The island of Islay is just off the coast of Scotland.

A nickname for James in Lowland Scotland. Currently very popular with fans of the Outlander book and television series.

Originally a surname, which was a form of Kerr.

From a Scottish surname, originally a place name, meaning ‘wood’.

Anglicized version of Coinneach (handsome) and Cinaed (born of fire).

Meaning ‘chief lord’ in Gaelic and was a 6th century saint from Glasglow.

Originally referred to a person from Norway (known as land of the lakes).

Meaning ‘place of the elms’, this name was originally a surname.

Originally a surname used in England and Scotland.

Meaning ‘little hollow’, this was originally a place name.

Meaning ‘a discliple of Saint Columba’, this was the name of several kings of Scotland.

The Scottish version of Mark, which comes from the Roman god, Mars, and means ‘male’.

Gaelic spelling of Michael, meaning ‘who is like God’.

A surname meaning ‘from the mouth of the Roe’.

A variation of Murray, which is a Scottish and Irish surname.

Meaning ‘moor’ or ‘sea’ in Gaelic.

A Scottish or Irish surname.

Scottish form of Nicholas, meaning ‘victory of the people’.

Variant of Ramsey, which was originally a surname from the place name meaning ‘wild-garlic island’.

A Scottish and English surname referring to a person from the area of Ross in northern Scotland.

Scottish form of Sandy, a diminuitive of Alexander.

A Scottish and English surname, originally referring to a person originating from Scotland.

Scottish version of Joseph, meaning ‘he will add’.

Meaning ‘wolf’, this was originally a surname.

Meaning ‘summer traveler’, this name was originally from the Old Norse. In the 12th century a Scottish warlord formed a kingdom on the Scottish islands.

Originally a surname, it became popular to honour the Stuart royal family, which produced several Scottish and English kings.

From the surname McTavish, meaning ‘son of Thomas’.

A Scottish or English surname, originally meaning ‘Welsh’ or ‘foreigner’. William Wallace was a 13th century Scottish hero who is a symbol of Scottish freedom and whose story was featured in the movie, Braveheart.

Well, that’s our list of Scottish Gaelic boys names. I hope this list will help you find the perfect names for your wee bairn!

Don’t forget Amazon has the most AMAZING baby registry service!  You can make all your choices from the comfort of your own couch and your guests won’t have to run around town searching for the items on your list. Not to mention you get a free box of goodies valued at $35 as a thank you! Click here to start your Amazon baby registry now! 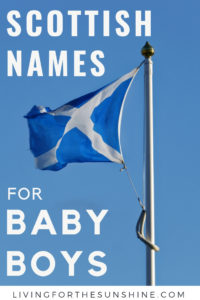 Looking for some sweet Scottish gear for your wee one? Check out these finds!